0
434 Views
Warning: json_decode() expects parameter 1 to be string, object given in /srv/users/serverpilot/apps/ecsunewsroom/public/wp-content/plugins/posts-social-shares-count/classes/share.count.php on line 66
0
Shares 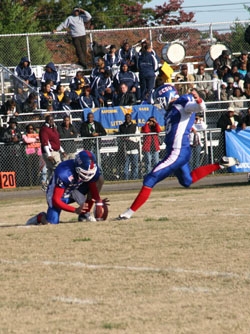 The Central Intercollegiate Athletic Association Football Coaches Association has made its selections Players of the Year. Special Teams Player of the Year, Kevin Dodson of Elizabeth City State University is a senior punter from Camden, NC.Â Dodson leads the conference in punting with an average of 41.2yds and recorded a long of 65 yds.Â He is also 16 for 18 in PATs.Â The three-time Specialty Player of the Week also ranks amongst the top in the conference in field goal percentage 60% and scoring (kick) 34pts. This year’s top offensive honor goes to freshman, quarterback, Stadford Brown of North Carolina Central University.Â As Player of the Year, Brown finishes the regular season at the head of the conference in passing yards, averaging 209.9 ypg, 24 TD’s and has a pass efficiency rate of 152. The 2006 Defensive Player of the Year, Kevin Jones of St. Augustine’s College is a senior linebacker that leads the nation in total tackles with 120 (58 solo/62 asst.) and is second in the nation with a 12.0 average.Â The two-time National Defensive Player of the Week has also been honored as the CIAA Defensive Lineman of the Week three times. The team will be recognized at the CIAA Football Championship Banquet on November 9, 2006 in Durham, NC.