Diabetes fourth leading cause of death for N.C. African Americans

0
396 Views
Warning: json_decode() expects parameter 1 to be string, object given in /srv/users/serverpilot/apps/ecsunewsroom/public/wp-content/plugins/posts-social-shares-count/classes/share.count.php on line 66
0
Shares 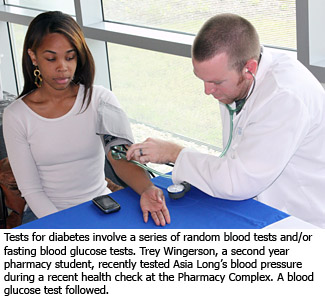 She was talking about diabetes a disease that effects how blood sugar – glucose — is absorbed in the body.

&quotEveryone has sugar in their blood. But the problem with diabetes is excessive sugar in the blood&quot said Dr. Anthony U. Emekalam assistant professor of clinical pharmacy at Elizabeth City State University and director of the ECSU Health Resource Center. &quotSugar shouldn’t be in the blood. It should be inside the cells and inside the tissues where it’s needed for metabolic activity.&quot

While old expressions may still exist people everywhere can benefit from information about diabetes and how to prevent it. With November’s designation as National Diabetes Awareness Month Emekalam and health professionals across the nation are joining the effort to combat the disease by bringing wider public understanding of diabetes and its impact.

Nationally nearly 26 million people have diabetes with another 79 million at risk for developing it according to the American Diabetes Association.

In North Carolina the statistics are particularly grim. According to 2010 national figures North Carolina ranked 13th highest among all the states for adult diabetes prevalence with nearly 1 in 10 adults diagnosed with diabetes. Diabetes also is the fourth leading cause of death for African-Americans in North Carolina.

The disease contributes to higher health-care costs for individuals because those who get diabetes often suffer from disease-related complications including heart disease blindness lower extremity amputations and renal disease. In 2007 diabetes contributed to 37596 hospitalizations in North Carolina alone and there were more 2608 lower extremity amputations among people with diabetes according to the North Carolina Diabetes Prevention and Control Program.

Emekalam is involved in numerous community health outreach activities including efforts to educate people about diabetes through church initiatives. Last week he met with pastors of 10 churches from North Carolina and Virginia about creating programs for diabetes awareness within their congregations.

Already a pilot program involving five churches in Elizabeth City and Hertford has been underway for about a year he said. From 300 to 500 people have been reached because of the churches’ commitment to diabetes education and awareness.

Similarly a free diabetes prevention and management program offered through the ECSU Health Resource Center has reached from 600 to 1000 people since it began four or five years ago. Additional funding is being sought to continue the monthly education programs free access to exercise equipment and diabetes and other health screenings.

Emekalam said it is important for people to understand the disease and what they can do to prevent it. While diabetes can occur in children or adults the adult onset – called Type II diabetes – is the more common form of diabetes.

&quotType II diabetes is a disease of lifestyle&quot Emekalam said. &quotIt’s when someone lives a life of inactivity and a life of uncontrolled consumption of unhealthy food.&quot

Normally when people eat their blood sugar rises but returns to normal levels after a short period when the excess sugar leaves the blood and enters the tissues where it’s used for cell metabolism Emekalam explained. A hormone called insulin which is created in the pancreas works to open the tissues to let the sugar in.

&quotWhen we don’t have adequate insulin to take the sugar from the blood into the cells the sugar has no choice but to stick around in the blood&quot he said. &quotAnd once it’s there it causes all kinds of problems for the patient – from blindness to heart disease kidney failure and lower limb amputation.&quot

Physical activity can help change that he said. &quotIt sensitizes your muscles to insulin and makes your insulin work harder for you. It really does help to control your blood sugar.&quot

He advises students faculty staff and people of all ages to get active. &quotIt is the best thing anyone can do for their body&quot he said suggesting brisk walking climbing the stairs instead of using the elevator and riding a bicycle.

&quotThat’s what makes this a compelling situation&quot Emekalam said. &quotAs a result of this situation — obesity among children – there’s a prediction that the generation that is coming behind ours is going to be the first generation in history that will have a lower life expectancy than we have.&quot

&quotThese are indications that you should get checked out by your doctor or a primary care physician&quot he said.&ampnbsp Tests for diabetes involve a series of random blood tests and/or fasting blood glucose tests. &quotGoing to a health fair and having someone pricks your finger may give you an idea but that doesn’t replace a diagnosis by seeing a doctor&quot he said.

Additional information including healthy recipes for the holidays is available on the American Diabetes Association website at www.diabetes.org or by calling the association’s Center for Information and Community Support at 800-DIABETES (800-342-2383). 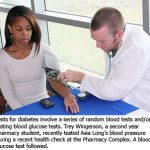 Diabetes fourth leading cause of death for N.C. African Americans