0
419 Views
Warning: json_decode() expects parameter 1 to be string, object given in /srv/users/serverpilot/apps/ecsunewsroom/public/wp-content/plugins/posts-social-shares-count/classes/share.count.php on line 66
0
Shares 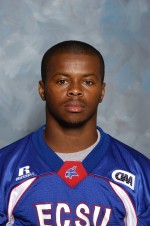 ELIZABETH CITY, NC- After being held scoreless in the first half for the first time this season, the Delta State University Statesmen rallied to score 17 unanswered points to defeat Elizabeth City State University 17-10 in the first round on the NCAA Division II Football Playoffs Saturday afternoon at Roebuck Stadium. Harlon Hill finalist Scott Eyster threw for 108 yards on 7-12 passing in the third quarter alone as the Statesmen put 17 points on the scoreboard. On their fist possession of the second half, Delta State orchestrated a 7-play, 68-yard drive that ended with a 6-yard touchdown pass from Eyster to Eric Marshall with 8:58 left in the quarter to pull them with three (10-7) of the Vikings. Just 42 seconds later, the Statesmen would convert a fumble deep in ECSU territory into a 30-yard field goal by Sid Halliday to knot the game a 10 apiece. After the Vikings’ ensuing possession went three and out, DSU’s Monterio James 26-yard punt return set up a 7-play , 39-yard scoring drive which was capped by a 2-yard TD run by Phillip Graves with 1:41 remaining in the quarter. That twould hold to be the winning score of the game. It could be described as a game of two quarters as the second quarter went the Vikings way as much as the third went for Delta State. After both offenses sputtered in the first quarter, the Vikings used special teams to draw first blood and break a scoreless game. Karl Wimberly blocked a punt attempt by Spencer Strickland and teammate Chris Shaw scooped up the live ball for a 30-yard touchdown to give ECSU a 7-0 lead with at the 10:44 mark of the second quarter. On their next possession, Kevin Dodson connected on a 29 -yard field goal to give the Vikings a 10-0 lead that would hold until halftime. For the afternoon the Statesmen rolled up 369 yards of total offense which more than doubled the Vikings output of 134 for the day. DSU also ran 73 plays to 46 for ECSU and converted on 19 first downs to just 9 for the Vikings. Although he threw two interceptions in the first half, Scot Eyser finished the day with 290 yards on 22-of-41 passing and a touchdown. Delta State also held ECSU, who finish the year at 9-3 overall, to just 39 yards on the ground. The Statesmen improve to 10-2 overall and will move on to the second round to face North Carolina Central University (11-0) in Durham, NC next Saturday. For more information on ECSU Athletics, visit www.ecsuvikings.com.