0
506 Views
Warning: json_decode() expects parameter 1 to be string, object given in /srv/users/serverpilot/apps/ecsunewsroom/public/wp-content/plugins/posts-social-shares-count/classes/share.count.php on line 66
0
Shares

Elizabeth City State University’s first-ever Day of Giving is paying dividends out in the community.

The event, held this past June, sought to raise $150,000 from 3,000 people in 24-hours. As a part of the fundraising event, community organizations were challenged to do their part, and those that raised the most money received donations to help with projects of their choice.

A check for $2,000 was presented to River City CDC Tuesday, Aug. 8. Like the Morning Rotary Club, River City will use the funds for a project of its choice.

The total amount raised during the Day of Giving was $129,530. According to Dr. John Michael Lee, Jr., the vice chancellor for university advancement, it was a good start for a first-time event. Aside from raising funds, the campaign was a way to raise awareness and excitement about ECSU, as well as connect with the greater Elizabeth City community.

Overall, the first-ever Day of Giving was a big success. 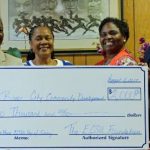