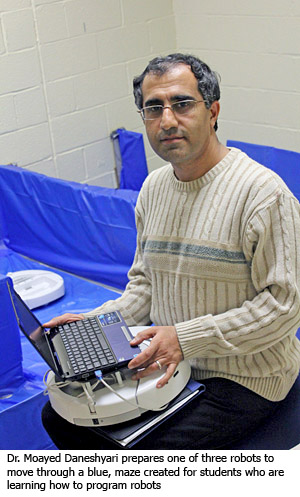 The National Science Foundation (NSF) has extended its support for an alliance of 19 historically black colleges and universities (HBCUs) and nine major research universities that encourages African-American students to pursue graduate training and research careers in robotics and computer science. Elizabeth City State University is a member of the alliance.

The NSF’s two-year, $1.5 million extension award will enable the Advancing Robotics Technology for Societal Impact (ARTSI) Alliance to develop additional curricula and outreach activities and to continue a summer research program for undergraduates.

In its first three years of operation, ARTSI has served more than 300 undergraduates, provided mentoring and technical assistance to 23 HBCU faculty who established robotics courses and laboratories, and delivered more than 60 robots to HBCUs for teaching and research. It has funded 50 summer internship opportunities for HBCU students to work in labs at major research universities and held three faculty summer workshops. More than 150 students are expected to attend the next annual ARTSI Student Research Conference slated for March 17 to 19 at Florida A&ampampM University in Tallahassee.

While Elizabeth City State University has been involved with the ARTSI Alliance project since 2007, Dr. Moayed Daneshyari, an assistant professor in the ECSU Department of Technology, joined the project in June 2010. His area of expertise is intelligent systems, particularly for robotics. Daneshyari has published one research book in intelligent systems and has one book under review for publication.

Daneshyari says ECSU students are learning in class how to program robots and they are&ampnbsp increasing their understanding of how robots move and maneuver, including robots with arms.

&quotThe students are learning about the structure and sensors on these robots. Different types of sensors interact with the environment the robot is in, which allows robots to function,&quot Daneshyari explained. &quotThe same company that made the robots we are using&ampnbsphas been involved with robots that vacuum and robots designed to mow the lawn. So there are good, common reasons for students to learn robotics.&quot

ARTSI also is part of the NSF’s Broadening Participation in Computing Program, which seeks to increase the number of women and minority students who pursue advanced training in computer science. The alliance has received corporate support from Motorola, Google, Intel, Seagate Technology, Apple, Boeing and iRobot.

For more information on the ARTSI Alliance, go to http://artsialliance.org.