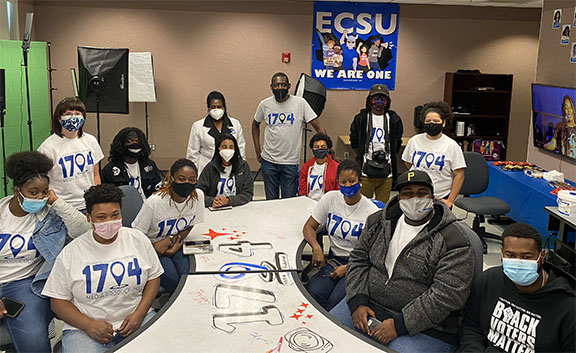 This is a new initiative, says Mr. Goss, through the Division of Academic Affairs and Academic Communications. The aim is to give creative students an outlet to showcase their skills and talents, learned in the classroom, in a real-world, professional setting.

“It is a working and functioning media production company where select ECSU students are given the opportunity to lead and assist on projects for the university, as well as projects by community partners and collaborators,” says Mr. Goss.

The students are from a variety of academic backgrounds, ranging from English and Digital Media majors to History and Graphic Design majors. They are playing a number of roles including editor, photographer, graphic designer, artist, writer, and more.

The projects currently on the table include a literary magazine, The Legacy, the live music series Check the Resume, and the revival of the student newspaper, The Compass.

Check the Resume is one of the first projects to incorporate the talents of ECSU’s creatives. Launched in 2020 as a live series, COVID-19 protocols put the performances online, thus creating an opportunity for students to produce videos for the series’ You Tube channel.

Check the Resume continues as a live performance series featuring student talent, but it is also remains an online sensation, providing not only the musicians a venue for their talents, but also 1704 Media Production student-volunteers. You can view the videos HERE.

The Legacy, according to Mr. Goss, is a literary journal in digital format. Led by creative writing professor Brande McCleese, the journal features not only original writing by ECSU students, but also original artwork.

One if the most anticipated projects by this group of students is the return of the campus newspaper, The Compass. The Compass has a long history of award-winning college journalism and while its past life existed as a traditional print newspaper, The Compass will now be a bi-annual, digital publication, says student editor Veronica Downing.

“We want this to be the student voice,” said Ms. Downing.

Ms. Downing, along with co-editor Hailey Ryan, says they are taking student submissions from any major, with or without writing experience. The key, she says, is to have something to say about life on or off campus.

“No skills, just come equipped with a voice,” she said.

The 1704 Media Production group also has its hands in community projects. Mr. Goss says the team of students is currently working on a grant with the North Carolina Project Gambling Project to assist in the organization’s rebranding efforts.

The students are also, says Mr. Goss, collaborating with the North Carolina Museum of History on its African American Cultural Celebration. They are producing video footage for the project.

Students are also producing projects to assist students. Timothy Streeter is working on a Criminal Justice program video that consists of interviewing students about their decision to major in the program and their goals for the future.

“The goal is to get their experience and why they chose Criminal Justice and what its impact will be on them,” he said.

Mr. Goss said there are future projects in the works. The 1704 students may eventually take over production of the provost’s newsletter for the Division of Academic Affairs, to name one.

In the meantime, people interested in following their work, reading original content produced by ECSU students, can go HERE. 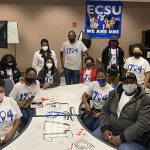