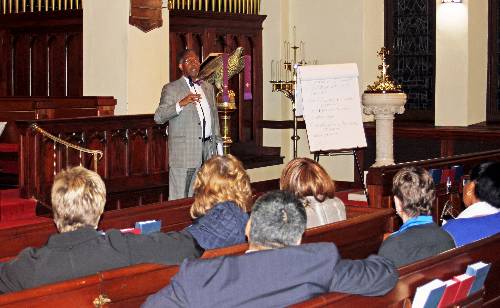 Bringing the Elizabeth City State University community and the greater Elizabeth City community together for the common good is one of the stated goals of Chancellor Thomas Conway. In that spirit on Tuesday March 7 inside the sanctuary of Elizabeth City’s Christ Episcopal Church about 50 community members gathered to talk about unity community cooperation and what needs to take place to make it all happen.

Co-sponsored by ECSU and the Elizabeth City Area Chamber of Commerce and hosted by Christ Episcopal Church ECSU’s director of special projects Russ Haddad emceed the evening. Community members were given the opportunity to discuss concerns and possible solutions to bringing the two entities together for the betterment of all in the region.

“Discover ways the community and the university needs to align” said Haddad describing the purpose of the event.

Chancellor Conway spoke to the crowd and observed that while ECSU and the surrounding community may be separate in many ways they are both a part of the same community. Coming together to assist one another will only be beneficial to all.

“There seems to be an understanding that the two need one another” said Haddad.

Concerns expressed by ECSU students revolved around an apparent lack of off-campus activities. Community members on the other hand stated they would like to see more participation by ECSU out in the community.

Haddad says that a major factor in all of this is communication and trust. Communication is key he said to not only establishing need but also sending a message that the university and the community do care about one another.

Trust was an issue that was brought up during the evening session. Community members stated that a stronger level of trust that the university will follow through with its commitments needs to be established. University community members – students faculty and staff – expressed a concern that some members of the community do not appreciate ECSU.

“I think the Chancellor summed it up best that the trust level between the two sides needs to be improved” said Haddad.

The next step said Haddad is to devise a plan to move forward.

“To bring the campus and community organizations together” he said.

For the university’s part several programs are either in place or in the works. Last semester the Viking Volunteer Corps was established bringing student faculty and staff volunteers out into the community to assist with any number of activities and events.

Another program in the works is “Paint the Town Blue” an effort to bring the Viking Spirit out into the community and get the community excited about ESCU. Haddad says that effort is starting with a presence at the Chamber’s annual business expo later this month.

In the meantime Haddad says that ECSU is opening “lines of communication to show how we can be of service to the community but it will take time to build that up.” There are also plans in the work for university officials to visit outside groups in an effort to establish a stronger community bond.

As for the community forum Haddad says there will be more opportunities for ECSU and the greater community to meet in the near future. He says they will be “check-ins” giving everyone an opportunity to assess progress and continue the dialogue that began last Tuesday. 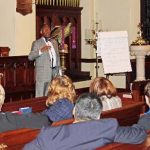