0
259 Views
Warning: json_decode() expects parameter 1 to be string, object given in /srv/users/serverpilot/apps/ecsunewsroom/public/wp-content/plugins/posts-social-shares-count/classes/share.count.php on line 66
0
Shares 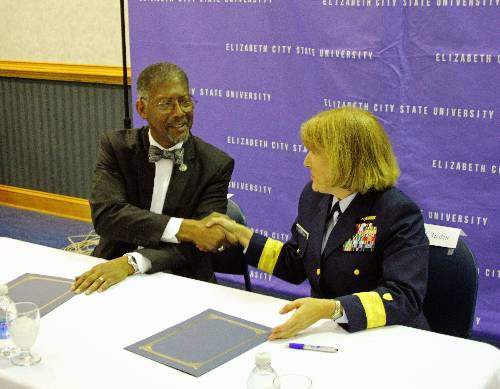 In a ceremony during the regular Elizabeth City State University Board of Trustees meeting Chancellor Thomas Conway and Coast Guard Rear Adm. Meredith Austin signed a memorandum of agreement Tuesday that will bring the two organizations together to better educate future Coast Guard leaders.

The purpose of the memorandum is to strengthen the relationship between ECSU and the Coast Guard. That relationship will assist the university in better offering educational opportunities to service members while also giving the Coast Guard the opportunity increase its military officer recruitment efforts.

Rear Admiral Austin arrived on campus Tuesday morning. She was greeted by ECSU’s Director of Veteran and Military Affairs Tim Freeman and Elizabeth City Coast Guard base executive officer Cmdr. Warren Judge an ECSU graduate. Freeman and Judge worked together in an effort to make the memorandum a reality for both ECSU and the Coast Guard.

Freeman and Judge offered the admiral a tour of the aviation technology lab where she was given a chance to meet with students and experience the flight simulators firsthand.

From the aviation lab the admiral walked to the child care center located at McClendon Hall. Director of the facility Sharon Key-Sutton spoke about the five-star child care facility and assured the admiral that Coast Guard families in need of child care would be accommodated.

After a luncheon at the K.E. White Center Rear Adm. Austin joined Chancellor Conway for the official ceremony. The pair signed the agreement signaling the start of a new partnership between ECSU and the Coast Guard. 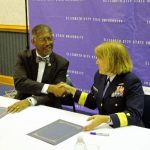