Home » ECSU in the Community News 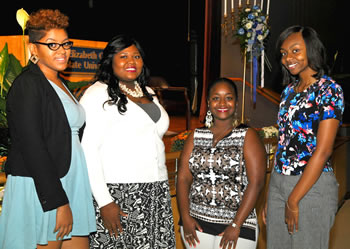 The annual Fall Convocation and Candlelighting Service, focused on sustained excellence, serves as the launching pad for annual ceremonies at Elizabeth City State University. Freshmen are inducted into the student body and the Pre-alumni Club at this ceremony. During this convocation, the standards of excellence are distinctly set for freshmen and transfer students. A full-cast of faculty charged with instructing them, patiently sat one aisle away from the newcomers, quietly witnessing their induction. Interim Chancellor Charles Becton delivered the speech for the ceremony and urged them to realize this year is an empowering opportunity. &quotDon’t squander this opportunity don’t defer the dreams of your parents, ancestors, and loved ones, whose sacrifices made it possible for you to be here,&quot Becton said. &quotEach of you has the potential to be a high achiever and a major contributor to society, but it will take preparation, hard work, and a sacrificing commitment from you.&quot Dr. Jeanette Evans, a 1963 graduate of the institution and president of the National Alumni Association, rose to the podium, prompted the class of 2018 to raise their right hands and recite a longstanding pledge: &quotI pledge, to the best of my ability, to uphold the goals and objectives of the club by achieving excellence in my studies, rendering positive and dignified services to the community, and fostering loyalty and fellowship among faculty, staff, students and alumni in preserving the rich legacy of Elizabeth City State University . .&quot Moments later, four, female class officers took their places on stage and completed their oaths of office. They shared reasons they are willing to not only pursue personal excellence but lead their classmates in the pursuit of excellence during the 2014-2015 year. Asia Romero, a psychology major from Bertie County, is president of the freshman class. She said she wanted to push her classmates to leave a positive mark not only at ECSU but the community. &quotAs freshmen are obligated to learn quickly and to set a higher standard for the next freshman class. We plan to create clubs, such as the drama/theatre club, and hold an arts fest [for] children from the surrounding schools,&quot Romero said. AJanae Willis, a history major from Fayetteville, is president of the sophomore class. She and her cabinet will focus on unity and pride in this historically black university. &quotWe’re preparing a historical display for well-known Vikings and people who are from the surrounding counties. Also, we are developing a series of &quotWho am I&quot forums we plan to reach out to the freshmen class of 2018 and mentor them, tutor them, and host events where we give them advice. This will be a productive year,&quot Willis said. Quisha Vaughan, president of the junior class, agreed improving connections to the community is an important goal. She would like to see her classmates work with high school students to prepare for the SAT test. They will also urge high school students to prepare their college applications early. Kalena Neal, president of the senior class, wanted to provide a voice for her classmates. &quotI felt I had the necessary qualities to lead my fellow classmates through our last year as undergrads. There are many obstacles we face while preparing ourselves for life after graduation and as the class president I want to make sure we are all equipped with the proper information and tools to succeed,&quot Neal said. &quotI plan on leaving an impression on Elizabeth City State University by reconnecting with the surrounding community through service and donations. I also plan to present the university with a token of our appreciation during graduation. Throughout various fundraisers this year, I hope to raise enough money to contribute to a cause of our choice dealing with the university.&quot Standing left to right, Kalena Neal, senior class president, Quisha Vaughan, junior class president, Ajanae Willis, sophomore class president, and Asia Romero, freshman class president. The four ladies recited the oath of office during the September 28, 2014 Fall Convocation and Candlelighting Service at the Mickey L. Burnim Fine Arts Center. Photo by Varick Taylor/University Relations and Marketing