0
314 Views
Warning: json_decode() expects parameter 1 to be string, object given in /srv/users/serverpilot/apps/ecsunewsroom/public/wp-content/plugins/posts-social-shares-count/classes/share.count.php on line 66
0
Shares 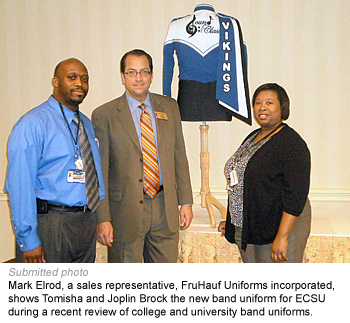 Tomisha Brock, director of bands and her husband, Joplin Brock, assistant director of bands at Elizabeth City State University are looking forward to their first semester at the helm of the university’s marching band. The two have exceeded their goal of the proposed 100 band members. They plan to present 128 band members at Roebuck Stadium for the first, home, football game in the fall. Tomisha Brock said the band is scheduled to perform at all home football games and most of the football games held away from campus. In addition, they will perform for three parades, some band exhibitions and a few marching band competitions. Brock couldn’t guarantee the date of arrival but said she expects the new band uniforms will likely arrive early in the fall semester. She credited alumni, faculty, staff and some small businesses with helping to purchase new band uniforms. &quotWe anticipate the new uniforms will arrive early to mid September with hopes of making a debut at the Down East Viking Football Classic. Our uniforms display a unique design that will allow us to wear them up to nine different ways,&quot Brock said. &quotIt consists of pants with built in suspenders and a coat with an overlay. We’ve abandoned the traditional cape for a right shoulder drape to set us apart from other university bands in the CIAA. One of the overlays is similar to the 1970s type uniform, it’s an interchangeable part.&quot Brock admitted that serving as a member of the marching band is a privilege and a great responsibility. These students, like athletes, bear the responsibility of performing for the public’s enjoyment and maintaining good academic standing–despite frequent travel dates. While she guarantees the band will please the audience with a variety of old musical favorites and some recent recordings, each student will be held to high standards. &quotOur performances (dance routines) will be family friendly, and the selection of music will represent a wide variety of music sure to please any generation. We’ll play contemporary jazz, gospel, patriotic, some hip-hop. You’ll hear music from well known groups that HBCU fans have long cherished—-Gap Band, Temptations, Kool and the Gang, Earth, Wind and Fire and more,&quot Brock said. &quotI expect each musician to place an earnest effort toward the overall performances of the band. Participating in the band requires them to display a variety of music skills from basic to advanced. While dancing is associated with show style HBCU bands, that element is not the most important one.&quot &quot In order to maintain membership, band students must have a minimum 2.5 grade point average (gpa) and continuously prove to be a knowledgeable musician. For me, that means memorizing the music and the routines, maintaining scholarship criteria of 2.5 GPA or better, participate in scheduled band performances, and meet financial aid guidelines. They must maintain exemplary character that’s a big thing for me.&quot During the academic semester, band rehearsals will likely last two hours per day. Brock said students will repeatedly be reminded that band participation must not conflict with academic performance. Students are expected to take their class assignments with them and complete them on time while traveling to away games. &quotWe will make arrangements for them to meet class deadlines while we are on the road. Everyone has access to a laptop. They will submit the assignments early or on time. Academics come first because we take it that seriously.&quot In order to help band members perform well, Brock said workshops will be held to inform students of good safety measures, proper nutrition standards, good study habits, test taking skills and leadership skills. &quotWe are giving the total education experience. We want them to be conditioned and prepared for the activities ahead of them. It is a big goal to collaborate with other university departments where staff/faculty can provide knowledge of safety, nutrition, and test taking skills.&quot In order to qualify for membership in the band, Brock said students must have one or two years musical experience in a high school band or evidence of private music instruction. She promises the requirements to join the band will be more stringent next year.