0
219 Views
Warning: json_decode() expects parameter 1 to be string, object given in /srv/users/serverpilot/apps/ecsunewsroom/public/wp-content/plugins/posts-social-shares-count/classes/share.count.php on line 66
0
Shares

Elizabeth City State University Chancellor Thomas E.H. Conway stood before an auditorium full of faculty members gazing out over the rows of educators delivering a State of the University speech that at its core extolled the virtues of excellence.

“The pursuit of excellence” said Chancellor Conway Wednesday August 10 2016 during the Faculty Institute on the ECSU campus. “We all play a part in this.”

And it was with that tone and that focus that Chancellor Conway set out to make his case for preparing ECSU for the 2016 fall semester.

“We will not accept anything less than the best of service” he said. “It is important that we adopt the attitude that we bring value.”

And with that in mind Chancellor Conway posed the questions: Why are we here? Where are we going?

He spoke of the missions of various University of North Carolina constituent institutions. When ECSU was founded in 1891 the mission was to provide opportunity for the economic development of the African American citizens of northeast North Carolina.

But missions evolve and so has that of ECSU. While ECSU is a historically black university and as an HBCU that “mission is not complete yet” Conway Chancellor said today one-in-four students are not African American. That means that ECSU is an “access institution” and its mission is that of a regional university.

And access he said means different things to different people. For some it is a leg up for others it is simply being given a chance to prove themselves while others simply need a means by which they can pull themselves up. It is Chancellor Conway said up to ECSU to provide the tools necessary to achieve one’s goals.

While providing access to as many individuals as possible is at the core of the institution Chancellor Conway also said ECSU is taking on a new identity as it becomes one-of-three schools in the N.C. Promise program. Prompted by Senate Bill 873 N.C. Promise includes ECSU UNC-Pembroke and Western Carolina University. Each campus will offer $500 per semester tuition for in-state students and $2500 per semester tuition for out-of-state students beginning in the fall of 2018.

But that is only part of the story. While tuition goes down for students and their families the cost of education remains the same. That is why said Chancellor Conway the legislature will put money into the three universities to off-set costs.

“This does not change the quality of education” he said.

As ECSU moves into the future said Chancellor Conway the university must acknowledge that the faces of university students are changing. While there are traditional students enrolling increasingly there are transfer students coming in from community colleges and other campuses. And the non-traditional older student is also becoming more frequent on campuses.

“College students are getting older” he said. “In today’s classes the range of ages is not what it used to be.”

And they are coming to ECSU and other campuses across the state for he said a variety of reasons.

“We must provide the opportunity for adult students to do that” said Chancellor Conway.

There is also he added a very active effort to bring members of the military on campus with an emphasis on the Coast Guard. That effort he said will include online degree programs that would allow those students to continue their ECSU education after they have been transferred to a new duty station.

Ultimately he said it is up to faculty and staff to lead the way into the future. The perceptions these students hold the attitudes they possess are in large part a product of the value and excellence projected by the people of ECSU. 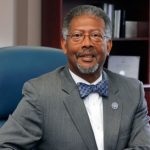