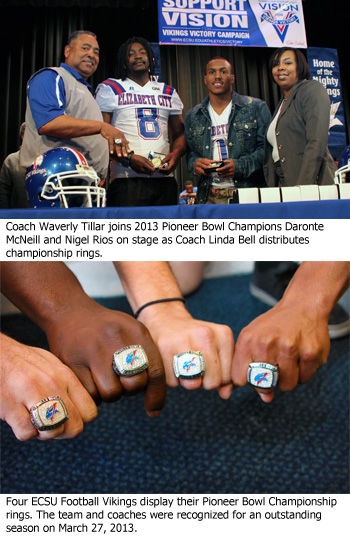 On March 27, boxes of Pioneer Bowl championship rings lay atop a table on the stage of the Floyd L Robinson Auditorium. Members of the football team and the coaches would finally wear the rings that signify the final victory for the 2012 season. The Vikings toppled Tuskegee University 28-13 on December 1 at AJ McClung Stadium in Columbus, Ga. April Emory, sports information director, says the game will be remembered for some key accomplishments:

Waverly Tillar, head football coach, said the victory was truly sweet for the team and a dedicated coaching staff. &quotWe had a great season last year. The efforts of the kids alone helped us make a solid run through the (CIAA) conference. It was a tough loss to Winston Salem State at the championship game. We knew we had to return ready for the Pioneer Bowl in Columbus.&quot &quotWe went into the game optimistic and the guys pulled off a winning effort. Again we thank the alumni, fans and other donors who supported us all season. Thanks to WRVS FM 89.9 for live broadcasts. We really thank the donors for contributing toward the cost of these championship rings.&quot Dr. Angelia Nelson, interim athletic director said these student athletes have so many reasons to be proud of their season. &quotI am so proud of our Mighty Vikings, and this Pioneer Bowl win. The accomplishments of this team fill me with pride as I recognize the durability that allows them to excel as athletes is the same durability that allows them academic success.&quot &quotThe hours put in on the field, followed by the hours put in the classroom can seem like an insurmountable task to the undisciplined. However, I am grateful that we are able to provide balance and produce quality leaders.&quot The Spring Awards ceremony for ECSU alerts will be held Saturday April 27. There additional student athletes will be recognized for their accomplishments. The annual Blue and White scrimmage game is scheduled for April 11. Tillar invites the community to Roebuck Stadium for the first glimpse of the 2013 Mighty Vikings. # # #