0
299 Views
Warning: json_decode() expects parameter 1 to be string, object given in /srv/users/serverpilot/apps/ecsunewsroom/public/wp-content/plugins/posts-social-shares-count/classes/share.count.php on line 66
0
Shares 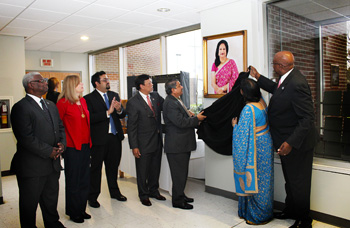 On Jan. 8, 2013, Elizabeth City State University held a ceremony to name the planetarium in honor of Dr. Sultana A. Khan, its long-time director. Khan, a physics professor and recipient of the UNC Board of Governor’s Excellence in Teaching Award, has been the facility’s director since its inception in 1990. As a crowd of faculty, staff, family and local residents looked on, Khan stood at the podium in the Jimmy R. Jenkins Science Center and reflected on years of shows at the planetarium. She recalled seasonal favorites and shows related to national holidays that drew school children and local organizations to the planetarium. She thanked her husband, Dr. Ali Khan, provost and vice chancellor of the ECSU Division of Academic Affairs, and their son, Dr. Ahmed Khan, a physician, for their patience and support through the years. Khan also told the audience she was greatly appreciative of the love and support she received from her parents and siblings. The ceremony follows 33 years of employment for Dr. Khan at ECSU. Her research focus is metal-insulator transitions and solar energy research with the National Renewable Energy Laboratory. Khan’s teaching interests include electricity and magnetism, astronomy, optics, thermodynamics, modern physics, mechanics and mathematical methods of physics. The planetarium opened on Jan. 23, 1990, with a visit from then-Gov. James G. Martin. At that time, the planetarium consisted of a 30-foot dome with a uni-directional classroom seating 54 and a SPITZ 512 star projector. The planetarium has grown and currently is equipped with 60 uniquely designed planetarium chairs, more than 40 automated mechanical projectors and a collection of advanced audio visual equipment, three screens of full-motion video from DVD, laser disc or VHS and a professional theater-quality sound system. After the ECSU Board of Trustees voted to name the facility in her honor, Khan said she was fortunate to be acknowledged for the work she loves to do. &quotIt is wonderful to know that this legacy will be here for a long time,&quot Khan said. &quotThe planetarium is an important reflection of ECSU’s commitment to outreach and community engagement and academic excellence,&quot Khan said. &quotI’m very thankful to our Board of Trustees for recognizing our achievements. Faculty, staff, administration, students and alumni have contributed to the planetarium’s success.&quot Dr. Khan is a native of Dhaka, Bangladesh. She earned her bachelor’s degree in physics in 1970 and her master’s in physics in 1972 from the University of Dhaka. She earned her doctorate in physics from the University of Scientific &amp Medical of Grenoble in France in 1977. She arrived at ECSU in 1978 and recently retired. After the ceremony, ECSU Chancellor Willie J. Gilchrist assisted the Khans in the unveiling of her portrait now hanging in the lobby outside the planetarium. # # #