Celebrate the tunes of our lives

0
354 Views
Warning: json_decode() expects parameter 1 to be string, object given in /srv/users/serverpilot/apps/ecsunewsroom/public/wp-content/plugins/posts-social-shares-count/classes/share.count.php on line 66
0
Shares 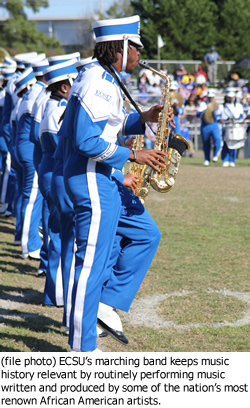 Since President Jimmy Carter’s1979 declaration of June as Black Music Month, fans have applauded recognition for artists who made undisputable impressions on the music industry. Writers, producers, singers, musicians and a host of other people working behind the scenes held a magnitude of talent that characterized generations. The airwaves marked the starting point for their unique blend of melodies and harmonies. Our memory banks were the final destinations, bookmarking thousands of images and sounds from our favorite performing artists. From the speckled, feathered, pinstriped and skin-tight costumes of some singers to the dazzling evening gowns of female groups, the performers influenced the nation’s fashion and social trends. Their progress was at times blemished by politics, war and social upheaval. As technology advanced video productions, fans lost less time waiting to see these trend setters. With the signing of a congressional bill in 2000 slating June as Black Music Month, fans could finally claim this date as a national observance. For many, June is only the beginning of a series of summer picnics and family gatherings where adults can share this history with youths. Tracking stars’ rise to fame has been an interesting task for historians, scholars, movie makers and everyday fans. According to ECSU music professor Roosevelt Newson, their contributions to the American music scene are undeniable. Newson has over 25 years of experience as an administrator and over 20 years as a concert pianist. Two of his most recent lecture series at ECSU were &quotThe Invention of the Negro and the Evolution of His Music&quot and &quotThe Era of Ragtime.&quot &quotAmerica’s music is, indeed, unique. It is a language different from that of any other nation, ethnic group, and/or race. It has drawn musical elements from diverse cultures, but has maintained a distinct and quite identifiable sound,&quot Newson said. &quotThe contributions of African slaves must be noted to the creation of America’s unique sound. It is a sound and attitude that evolved over a period of 150 years and gave life to what is now known as American music.&quot Newson argues that that Black performers/composers walked an ever winding trail that allowed them to express a slew of emotions in the form of Negro spirituals, blues, jazz, gospel, ragtime and Dixieland. Some like Mahalia Jackson, Albertina Walker, and John P. Kee were uniquely linked to the faith community. Ray Charles, Nat King Cole, George Duke among others were fortunate enough to form fan bases in two or more musical genres. George Benson’s ambition and talent earned him chart topping awards that recognized his skills as a composer/ musician and singer. The dual skills of some artists propelled them to careers that spanned decades. Lionel Richie, Barry White, Ashford and Simpson, Oleta Adams, Stevie Wonder, Smokey Robinson and Babyface had skills that allowed them to excel as singers, musicians, composers and or producers. Those talented enough to write award-winning songs for themselves and for other recording artists collected caseloads of awards. In addition, it brought recognition by some of the most powerful organizations/associations in the American music industry. Whether the music of African American artists stirs personal memories from concerts or televised awards shows, take time to celebrate the tunes of our lives. For a more thorough evaluation of this historical rise of performing artists, enroll in &quotAfrican Americans in Music,&quot a course offered in the ECSU Department of Visual and Performing Arts. While the course includes students majoring in music and those participating in the department’s ensembles and bands, anyone is welcome to enroll.

Celebrate the tunes of our lives