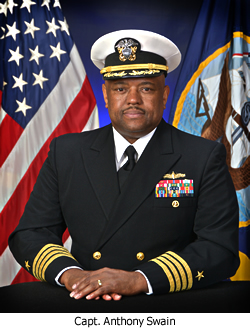 Capt. Anthony Swain, ’82, will be Elizabeth City State University’s Homecoming 2013 Grand Marshal. Swain, a native of South Mills, N.C., is the assistant for surface warfare for the Office of the Naval Inspector General of the U.S. Navy. He is a life member of the ECSU National Alumni Association and an active member of the D.C. Metro Alumni Chapter. He also is a recipient of the Chancellor’s Legacy Award at ECSU. He looks forward to the Homecoming Parade on Saturday, Oct. 19, when fans and supporters will line the streets of Elizabeth City. &quotThis is the first time I have been a grand marshal and I am honored to be selected,&quot Swain said. &quotI represented the Navy during a Veteran’s Day parade in New Orleans in 1999 and enjoyed it.&quot The parade is one of the highlights of Homecoming events that will take place from Oct. 13 through Oct. 20. At the Homecoming football game slated for Oct. 19, the ECSU Vikings will play Lincoln University. Swain said he is looking forward to returning to campus and seeing other alumni, especially those from his Class of 1982. &quotI am calling on alumni from the 1980s to attend as many Homecoming 2013 events as possible in support of ECSU,&quot he said. For Swain, returning to the university is a rewarding experience. He initially learned the value of honor, courage and commitment in northeast North Carolina, long before his Navy experience began. As a result of that moral foundation, Swain said he still lives by that code of conduct today. He is proud to serve as an ambassador for the nation and ECSU. He encourages students and Viking alumni to proudly serve the nation as best they can. &quotThe core of my success as a naval officer is owed to my ECSU education and my experiences there. I have visited over 60 countries, met a myriad of people all over the world, tasted exotic foods, exchanged cultural insights, and had unimaginable encounters only experience can convey,&quot Swain said. &quotThe next generation of Vikings will have opportunities to achieve even more with the education offered at our great institution. Have the courage to dream, make the commitment to live the dream, and honor those who came before you.&quot Swain earned a bachelor’s degree in accounting and business/management from ECSU in 1982. He holds two master’s degrees, one in finance from Naval Postgraduate School in 1992 and another in national resource strategy from National Defense University in 2002. During his 29-year career in the Navy, Swain has served as the commanding officer on three ships. In several leadership positions, he has been responsible for leading Navy officers and hundreds of sailors. His assignments were carried out while the ships were deployed for war and peacetime operations. Join Swain and other ECSU alumni, students and supporters celebrating Homecoming 2013 at the following events: www.ecsuhomecoming.com