0
260 Views
Warning: json_decode() expects parameter 1 to be string, object given in /srv/users/serverpilot/apps/ecsunewsroom/public/wp-content/plugins/posts-social-shares-count/classes/share.count.php on line 66
0
Shares 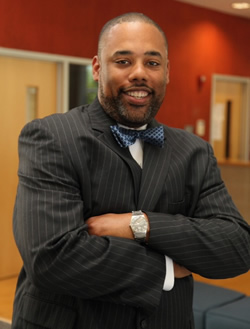 For university admissions staff, the sequence of moving students from the application page to the class roster page is continuously changing. Yet, Myron Burney, Elizabeth City State University’s interim assistant vice chancellor for Enrollment Management, says there is no need to despair -just update the game plan. When he arrived in January 2014, he found a processing system that didn’t suit today’s mobile tech-savvy applicants. He helped the staff focus on improving their communication routes with prospective students, upgrading computer software packages and replacing some tasks that had been handled manually. The university also hired additional personnel for processing applicants. &quotI plan to have them handling everything electronically by the end of the year as we move to a paperless process,&quot Burney said. &quotI also incorporated an electronic messaging campaign for admitted applicants, as well as a social media campaign.&quot In addition, they are building a pipeline for the future by collecting information on 800 prospective students who range from eighth to eleventh grade. While ECSU draws students from counties across the state, a small percentage of out-of-state students and those abroad, many come from the 21 surrounding counties. Those students come from towns where the lifestyle is simple. The selection of educational resources in those counties doesn’t reflect the selection of educational resources in the state’s metropolitan counties. Burney can identify with them and warmly welcomes them. ECSU, after all, has well served students from humble beginnings for 123 years. &quotI am from Chadbourn, N.C. which is located in one of the top five, most underserved counties in N.C. Elizabeth City a big city compared to my hometown, so I know what it is like to come from a very small town and go on to live your dreams,&quot Burney said. After graduating high school, he earned a bachelor’s degree in English from Morehouse College in Atlanta, Ga. and a master’s degree in liberal studies from N.C. State University. He learned to function and excel in major cities beside classmates who came from various segments of the nation’s population. He is optimistic students can excel once they settle in. He is confident students can find their niche at ECSU. Now that the university’s selection of scholarships is expanding, the financial burden of attending college is easing for prospective students. &quotWe have offered more academic scholarships to high achieving students in this area than ever before. This has allowed us to bring strong students, those with good grade point averages, to our enrollment roster.&quot To ensure the freshman year success rate, ECSU will welcome over 60 students to attend a free summer program that prepares them for fall semester. These students have been accepted to the university and will take 6 credit hours of courses.They will learn what is expected of college freshmen-the level of classroom performance that may differ from high school where instructional methods target a wide base of the population. He acknowledges the university has faced enrollment challenges for a number of reasons beyond the control of ECSU faculty, staff and administrators. The UNC General Administration now requires all students to enter its universities with a minimum 2.5 grade point average. Applicants must graduate from high school with adequate units of language, math, and science and acceptable scores on the ACT or SAT. Other factors affecting current enrollment include the cost of attending college. The staff in the Admissions Office is working diligently to reach prospective students who want to learn and graduate to rewarding careers and service posts. Burney is confident improved customer service mechanisms and other upgrades will help Admissions staff raise enrollment rates. Burney said a revolution is underway in the ECSU Admissions Office. Yet, the same caring environment that helped past students enroll and excel academically awaits the next generation of Vikings. &quotI am certain our students and parents will see an enhanced level of customer service from the Enrollment Management Offices which include Admissions, Financial Aid, Retention, and Military Affairs,&quot Burney said. &quotWe are confident of the direction we are headed in. Our full new plan will impact every phase of the admissions process– from the recruitment of prospects to the follow-up phase with incoming students.&quot