Brenda Brown is new head coach for the volleyball team

0
596 Views
Warning: json_decode() expects parameter 1 to be string, object given in /srv/users/serverpilot/apps/ecsunewsroom/public/wp-content/plugins/posts-social-shares-count/classes/share.count.php on line 66
0
Shares 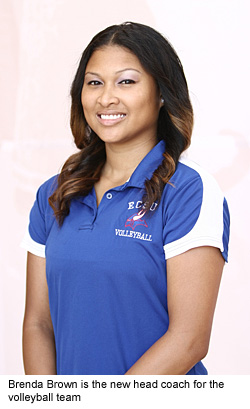 Brown replaces Linda Bell who moves into the role of Assistant Athletic Director for Compliance for the department.

This will be the first head coaching job for Brown who comes to ECSU after a much heralded career as a volleyball student-athlete at North Carolina Central University in Durham, NC. During her career as a Lady Eagle (2002-2005), Brown was a two-time All-CIAA First Team selection (2004, 2005). She garnered Second Team honors as a sophomore in 2003 and was a member of the All-Rookie team in 2002. In 2004 Brown was a member of the team that captured the school’s second CIAA Volleyball Championship in 2004 and was named Most Valuable Player of the CIAA Tournament her senior season when the team repeated as conference champions. Her final season NCCU posted an impressive 29-14 overall mark and went a perfect 16-0 in conference play.

During her stint as a player, the Lady Eagles were 59-5 versus conference opponents, played in four straight CIAA title games and advanced to the NCAA playoffs twice. She finished her career as NCCU’s all-time leader in digs with 1,465 and ranks 4th all-time in kills with 1,168 and 7th in service aces at 125.

Brown holds a B.A in Sports Management (2006) and earned a Masters in Athletic Administration in 2010 from North Carolina Central University.

The Lady Vikings will open up the season September 2 when they travel to Washington, DC to take on the University of the District of Columbia.

Brenda Brown is new head coach for the volleyball team