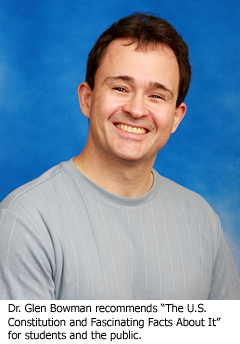 ECSU students will join millions of people across the country this week commemorating the drafting and signing of the U.S. Constitution. While Constitution Day is Sept. 17, the day is observed on Sept. 16.

Dr. Glen Bowman, a history professor and chairperson of ECSU’s History and Political Science Department, said lessons related to the Constitution are not limited to one week at ECSU. Students enrolled in World Civilization I, World Civilization II and American National Government classes learn about the Constitution each semester. However, he suggests that teachers cautiously select instructional materials. After considering numerous materials, Bowman selected the film, &quotA Healthy Constitution (Founding Fathers: The Men Who Shaped Our Nation and Changed the World – Volume 4)&quot to kick start discussions in his classes. He said he favors the film because it is a good combination of documentary and film.

&quotThere are lots of films regarding the Constitution that are politically motivated. It is difficult to find video materials that are well done, based on history, and not propaganda,&quot Bowman said. &quotSome are ideologically based. This film helps students to become involved in an activity related to their class and the national observance.&quot

Bowman also distributes to students a booklet, &quotThe U.S. Constitution and Fascinating Facts About It.&quot The publication takes students beyond the familiar portions of the Constitution they may have memorized in elementary or middle school. The booklet contains the all-important document, as well as unusual facts that may take many people by surprise.

&quotThey might also be surprised to learn about the debate that took place (during the drafting.) Some of the same issues that are in the news today were issues then — the debate about freedom of speech, press and assembly.&quot

Looking for a few Constitution Day brain teasers that will challenge friends and family? Consider the following questions:

The answers appear in &quotThe U.S. Constitution and Fascinating Facts About It.&quot