Becerra is named CIAA Volleyball Player of the Year

0
682 Views
Warning: json_decode() expects parameter 1 to be string, object given in /srv/users/serverpilot/apps/ecsunewsroom/public/wp-content/plugins/posts-social-shares-count/classes/share.count.php on line 66
0
Shares 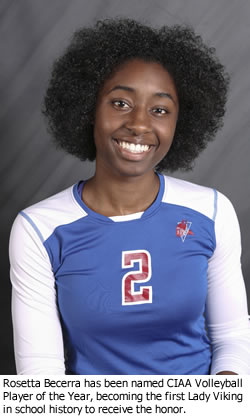 Rosetta Becerra has been named CIAA Volleyball Player of the Year, the first Lady Viking in school history to receive the honor. This season the junior outside hitter who hails from Riverside, CA led ECSU in kills with 295 and kills per set at just under 4 per set (3.99). She also ranked second on the team in digs. Becerra leads the CIAA in kills per set and was second in kills overall in the conference. The Lady Vikings finished the season 10-12 overall (CIAA 10-6) good for a third place finish in the CIAA Northern Division and qualified for the CIAA Tournament last weekend in Petersburg, VA. Becerra and the rest of the 2013 All-CIAA Volleyball team will be honored prior to the CIAA championship semifinals in Winston-Salem, NC. For more information on ECSU Athletics, visit www.ecsuvikings.com and follow on Twitter @ECSUVikings.

Becerra is named CIAA Volleyball Player of the Year