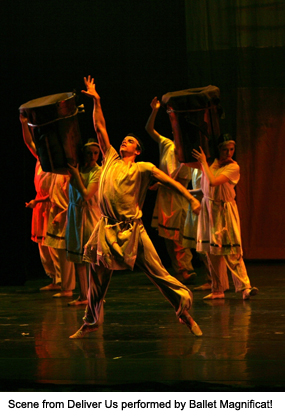 Ballet Magnificat!, the internationally recognized Christian ballet company, is set to perform, at 4 p.m. on November 20 at the Mickey L. Burnim Fine Arts Center. The world renowned organization that proudly relays the news of Jesus Christ through dance and drama, will bring both of its professional touring companies to northeastern North Carolina for one performance.

Ballet Magnificat dancers have won numerous fans with their performances on &quotThe 700 Club&quot and during live performances in cities across America, Canada, Belgium, the Czech Republic, the Netherlands, Greece, Singapore, Costa Rica and Puerto Rico.

Founded in 1986 by Kathy Thibodeaux, a silver medalist at the II USA International Ballet Competition and now the organization’s artistic director, the company maintains its headquarters in Jackson, Mississippi. Their dancers come from dance companies around the world but now focus their attention on performances that maintain the highest standard of excellence artistically, technically, spiritually and morally.

Erin Beaver, tour director of the Omega Company, said their performance is one that people of all ages can enjoy. The audience can expect 30 dancers from multiple continents in a two-fold performance.

&quotWe do few performances together (Alpha and Omega companies) but this will be a special collaboration for Elizabeth City. This is an exciting production–first a Christmas festival of melodies, a really celebratory performance we have done throughout the years,&quot Beaver said.

&quotThe second portion is a piece called &quotDeliver Us,&quot an incredible story, the dramatic portrayal of Moses taking the Israelites out of Egypt. We have performed for audiences in North Carolina many times, and we look we look forward to performing for the audience in Elizabeth City.&quot

The performance is one of five performances scheduled during the 2010-2011 Lyceum Series at Elizabeth City State University. For tickets, go to www.etix.com Clown’n Around on 209 Charles Street, in Elizabeth City, N.C., and the ECSU Cashiers Office in the Marion D. Thorpe Administration Building. Ticket prices are $5 for children 12 and under $5 for ECSU students with university ID card and $10 for the general public.