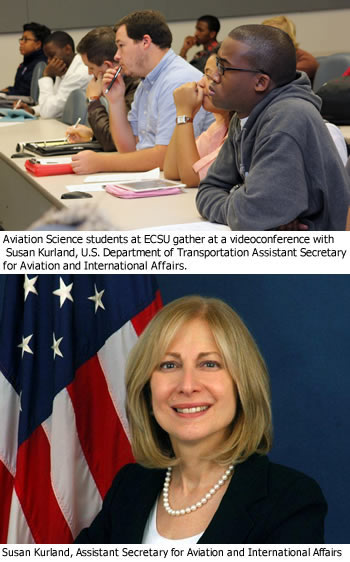 When aviation science students at ECSU looked for answers to their questions about future developments in transportation, they turned to a well informed source-Susan Kurland, U.S. Department of Transportation Assistant Secretary for Aviation and International Affairs. Students from three aviation science classes gathered in the Pharmacy Complex’s videoconference room to welcome Assistant Secretary Kurland for a discussion that spanned from career options to airline corporate mergers. Kurland and her staff eagerly relayed to the students their job responsibilities, life lessons, and skill sets utilized while working and making policy at the U.S. Department of Transportation. Orestes Gooden, an aviation science lecturer for the participating students, said Kurland agreed to the session at the request of an ECSU student, Justin Waddell. He is pursuing an aviation degree at ECSU and he completed internships with Federal Aviation Administration over the past three summers. Gooden said the video conference was a great opportunity for students to hear the kind of skills, credentials and experiences that allow today’s aviation professionals to excel in their careers. He was impressed by Kurland’s willingness to participate in the videoconference and was delighted she included college interns now working for the agency in the discussion with ECSU students. This forum culminated the Technology Departments prestigious fall 2013 Distinguished Lecture Series where ECSU students, faculty, and staff shared in active learning engagements with government and private leaders and aviation professionals in the aerospace industry. Kurland was nominated by President Obama to serve as Assistant Secretary for Aviation and International Affairs in July, 2009 and confirmed by the U. S. Senate in August, 2009. A key member of the Secretary of Transportation’s senior team, Kurland directs economic and competition policies affecting the air transport industry and she oversees the Department’s international activities. She serves as the DOT decision-maker in proceedings involving allocation of international aviation route authority, licensing of domestic and foreign air carriers, grants of antitrust immunity for international aviation alliance activities and provision of air services to rural U.S. communities. Additionally, Kurland leads Department efforts on international technical cooperation, standards harmonization, trade advocacy and export promotion. Kurland brings extensive senior public and private transportation experience to her current role. Prior to joining the Department of Transportation, she was a managing director at Jefferies &amp Company focusing on airport infrastructure and municipal finance projects and headed the firm’s municipal finance group in Chicago. She served as Vice President and Deputy General Counsel of U.S. Airways and also led the Federal Aviation Administration’s national airports program as Associate Administrator for Airports. During her time as Deputy Corporation Counsel for the City of Chicago, she served as general counsel for Chicago’s airport system. Kurland holds degrees from Brandeis University and Boston University School of Law.