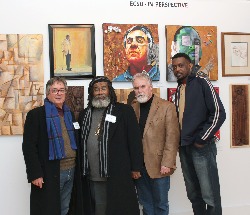 Visit Arts of the Albemarle galleries anytime of the year and you will find an incredible selection created by local artists, crafters and photographers. Through the month of February, see their retrospective art exhibit, ECSU in Perspective, which showcases work by university alumni, former and current university faculty, students and area artists. Jeff Whelan, an assistant professor in the Visual and Performing Arts Department at ECSU, said it wasn’t difficult to find entries given the number of artists who fit those categories.

“When Barbara Putnam, gallery director, approached me back in November about a show I agreed and worked with Clarence Goss (an ECSU faculty member) to develop the idea and publicize it,” Whelan said.

“The response was overwhelming. The show reveals a rich and varied history of the visual arts at ECSU that remains a vital force in our community to this day. At the February 5 opening, I received several comments from individuals indicating that this was certainly one of the best shows they had seen at AOA.”

&quotECSU in Perspective was a wonderful opportunity to display the extraordinary job the ECSU Art department faculty has done over the years to produce talented, skilled, educated, and productive visual artists” Goss said. “ECSU in Perspective also is a great example of how important a role the arts play in uniting the university with Elizabeth City.”

Joyner, who has contributed extensively to regional exhibits over the last four decades, also displayed art in galleries across the nation and abroad. He said this exhibit was indicative of the span of artwork ECSU students produce.

“A lot of the people who came back for the opening night of this exhibit were in graduate school or were recently accepted into graduate school. The show is indicative of the work we urged students to produce. It is especially rewarding to see a variety of art displayed. Art is for everyone, not just the elite who have frequented galleries for decades.”