0
796 Views
Warning: json_decode() expects parameter 1 to be string, object given in /srv/users/serverpilot/apps/ecsunewsroom/public/wp-content/plugins/posts-social-shares-count/classes/share.count.php on line 66
0
Shares 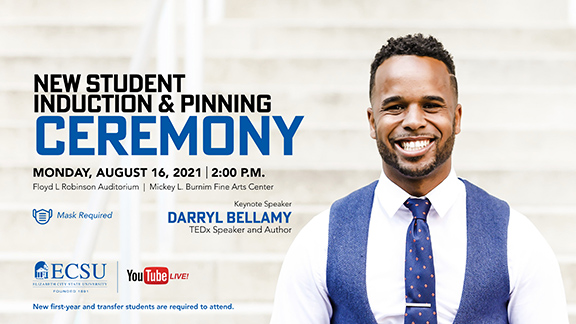 Becoming a Viking comes with “pomp and circumstance,” a new student pinning and induction ceremony that has its roots in the early days of Elizabeth City State University.

On Monday, Aug. 16, at 2 p.m., ECSU freshman will gather inside the Mickey L. Burnim Fine Arts Center to be pinned and inducted into the Viking family. The new students are presented with official ECSU pins by administrators, faculty, staff, and students.

This year’s keynote speaker is TEDx speaker and author of “Waking Up Chase,” Darryl Bellamy. Mr. Bellamy graduated from the University of North Carolina at Charlotte, and three years later became a “corporate America dropout” after quitting his job to inspire students.

While an undergraduate, Mr. Bellamy was heavily involved on his campus as an RA, Orientation Counselor, Student Government Association, leadership workshop facilitator, as well as a “proud brother of Kappa Alpha Psi Fraternity, Inc.” He is considered an “expert on the topic of student fear” after “collecting, reading, and cataloging thousands of written student fears.”

In recent years, ECSU has held a new student induction ceremony at the start of each fall semester. The tradition, however, goes back to a candle lighting ceremony that began during the John Bias administration.

According to the book, “A History of Elizabeth City State University: A Story of Survival,” by Evelyn Adelaide Johnson, the tradition was started by English instructor, Eva J. Lewis.

“It was used as a vesper program and was usually sponsored by the Nautilus Club, a social organization of which she (Ms. Lewis) was the sponsor. The impressive ceremony became an annual program continued during the Harold L. Trigg administration,” wrote Ms. Johnson in her book.

When Sidney D. Williams became president of the institution, Ms. Johnson writes that the program was officially put in writing and recognized as “a traditional ritual which officially inducted freshmen into the campus family.”

The tradition would undergo a few changes over the years, but the candle lighting would continue for some time. Ms. Johnson writes that it was a moving ceremony:

“A beautiful scene was beheld when the entire audience passed through an aisle of lighted candles in the Moore Hall corridor, after which time the freshmen, candles in hand, advanced to the flagpole and sang the ECSU Alma Mater, learned during freshman orientation.”

Today the candles are no long a part of the ceremony. However, the ritual induction of new students is an emotional and proud moment for the many that attend the ceremony. 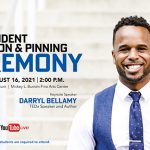