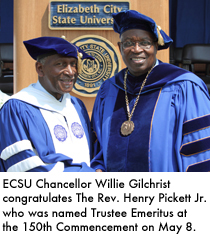 Rev. Henry Pickett a 1961 graduate of Elizabeth City State Teachers College was named Trustee Emeritus during the 150th Commencement at Elizabeth City State University. A Trustee Emeritus has none of the obligations of membership but is entitled to the privileges except those of making motions voting holding office and attending closed sessions of the full Board of the Executive Committee.

&quotIt was a great honor and privilege to serve the university I was a graduate of. I learned a lot as trustee and it was an humbling experience to help make decisions that would affect students faculty and staff&quot Pickett said.&ampnbsp &quotI enjoyed working with both the Chancellors (Burnim and Gilchrist).&quot

He retired from the Wake County Public Schools (1991). Pickett served several churches in the Raleigh N.C. area as a pastor and he’s currently an associate pastor at Cosmopolitan Baptist Church in Raleigh.&ampnbsp He works as substitute teacher for middle schools in Raleigh. 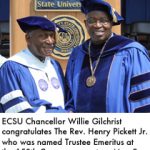