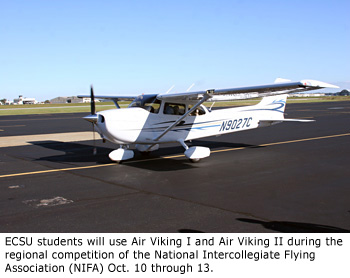 Elizabeth City State University celebrated the arrival of Air Viking One on October 29 at the Elizabeth City Regional Airport.&ampnbsp Dr. Anthony Sharp, director of the Aviation Science Program at ECSU was the pilot of the morning flight, and Chancellor Gilchrist was the sole passenger. The airplane arrived shortly after 10 a.m. Friday to greet a cheerful crowd of Viking supporters.

The new Cessna Skyhawk, a single engine airplane, was purchased for the purpose of training aviation science students. Eight students majoring in Aviation Science joined Chancellor Gilchrist at the podium as he thanked the crowd of alumni, students, staff, faculty and area dignitaries for witnessing the arrival of the new plane.

&quotFor years, we’ve been expecting an airplane for our aviation science students. We’re flying now! I’m looking forward to turning the keys over so one of our students, Corey Kellum, so he can fly this plane for the first time,&quot Gilchrist said. &quotI want to thank all of you for your support of Elizabeth City State University.&quot

Air Viking One was purchased by a special allotment of Title III funding. Dr. Sharp said he is pleased to bring the airplane to Elizabeth City for student instruction.

Administrators displayed Air Viking One at the entry of Roebuck Stadium Saturday, October 30 during the Homecoming 2010 football game where the Vikings took on the Hawks of Chowan University.