0
470 Views
Warning: json_decode() expects parameter 1 to be string, object given in /srv/users/serverpilot/apps/ecsunewsroom/public/wp-content/plugins/posts-social-shares-count/classes/share.count.php on line 66
0
Shares 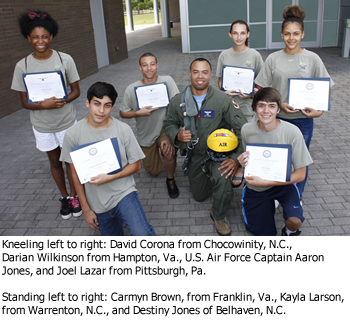 ECSU welcomed 27 high school students for this year’s ACE (Aviation Career Education) academy June 14 – 19. Their weeklong stay included workshops, rocket launch demonstrations, unmanned aerial systems flying competitions, hot air balloon demonstrations as well as field trips to the U. S. Coast Guard Air Station, Elizabeth City, NASA Langley Research Center, and the Wright Brothers National Memorial. The goal of the program is to introduce students to a wide range of career options relevant to the aviation and aerospace industry. On June 19, ECSU faculty in the Aviation Science program awarded certificates to the students who completed this year’s academy. U.S. Air Force Captain Aaron Jones was the guest speaker for the awards ceremony. Jones, a fighter pilot who has served in the U.S. Air Force 10 years, said he has flown missions over three different continents and seven different countries. He is confident the ACE Academy can prove useful in informing students of rewarding careers in aviation and aerospace. &quotThe idea is to have the right attitude, take responsibility for your education and training then, pursue your passion,&quot Jones said. &quotIf you are truly passionate about what you are doing or want to do in life, then no obstacle—-oh and there will be roadblocks—can prevent you from attaining your heart’s desire.&quot Several high schools, community colleges and universities across the country host these fun, interactive summer camps for middle and high school students. ECSU has held the ACE Academy program for the past seven years. Many of the students attended for the first time, however one student returned for the fourth time. The ACE Academy was sponsored by the Division of Aviation for the N.C. Department of Transportation. ECSU Aviation Science faculty, Dr. Kuldeep Rawat and Mr. Orestes Gooden, oversaw this academy.