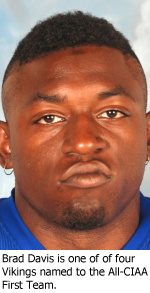 Northern Division Champions Place Two on Offense, Defense Four members of the Elizabeth City State University football team have been named to the 2012 All-CIAA Team. All-Americans Daronte McNeill and Brad Davis along with All-American Candidate Nigel Rios repeat as First Team honorees while offensive lineman Vincent Maene lands on the All-CIAA Team for the first time. In his first season with the Vikings, Vincent Maene led an offensive line that helped McNeill capture his third consecutive 1,000 yard rushing season. McNeill, ECSU’s all-time leading rusher, became the first Viking to rush for over 1,000 yards in three straight seasons. He broke his own school records for individual carries in a game with 44 (Bowie State 11/3/12) and touchdown in a game with 6 against Lincoln University on October 13th. To date he has net 4,689 yards and owns a combined 16 CIAA and ECSU records. For the Viking defense, senior defensive lineman Brad Davis and junior cornerback Nigel Rios both make the All-CIAA Defensive First Team for the second straight season. Davis, who earned All-America second team honors in 2011, led the Vikings in sacks this season with 11.5 and was first in tackles for loss with 19.5 for a loss of 109 yards. Rios has made a case for All-American honors this season as the Vikings’ leading tackler with 69 (53 solo). He was a four time CIAA Defensive Back of the Week in 2012 also had 4 blocked kicks, 2 fumble recoveries for 60 yards, a 96 yard interception returned for a touchdown and a scored a defensive two points in ECSU’s two point win over Saint Augustine’s on September 29th. On Saturday, Davis showed CIAA fans why he is worthy of his place on the All CIAA Football First Team. He was tabbed as the Championship’s Defensive MVP. For more details on the championship football game, see: http://www.ecsuvikings.com/sports/m-footbl/recaps/111012aaa.html