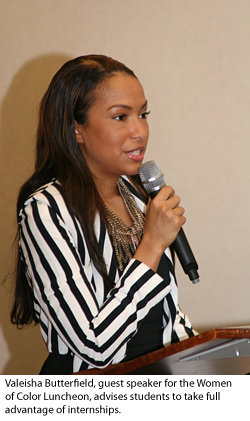 The Office of Multicultural Affairs held a Women of Color Luncheon on March 29&ampnbsp in celebration of Women’s History Month in the Ridley Student Complex. The event included poetry readings, musical selections and award presentations by ECSU students. The group welcomed a North Carolina native Valeisha Butterfield as their luncheon speaker.

Prior to joining the Obama administration, Butterfield served as the Executive Director of the Hip-Hop Summit Action Network for nearly six years under the leadership of its founder and co-chair, Russell Simmons. Butterfield was recognized for her leadership as one of the youngest executive directors in the United States, developing critically acclaimed financial literacy and voter education programs for young adults 18 – 35 years old throughout the U.S. and Canada.

Butterfield previously served as the Director of Diversity for the national office of the Alzheimer’s Association. The first to serve in this role, Butterfield developed recognized programs targeting underserved communities for the organization’s 77 chapters nationwide, expanding her marketing expertise to senior populations.

In 2000, upon graduating from college with a Bachelor of Arts degree in Political Science, from Clark Atlanta University, Butterfield worked as the Field Coordinator for the Campaign to Re-Elect Chief Justice Henry Frye to the North Carolina Supreme Court. During this experience, Butterfield supported the field operations and get-out-the-vote programs of a statewide campaign for a key state in electoral politics.

Butterfield was recognized by ESSENCE Magazine as a Top 40 executive under 40 (October 2010), has been featured on Black Entertainment Television as a recognized expert on teen issues and honored by Who’s Who in Black Washington, D.C. (second edition), the Boss Network and others. Butterfield is the daughter of United States Congressman G.K. Butterfield and North Carolina State Legislator Jean Farmer Butterfield.