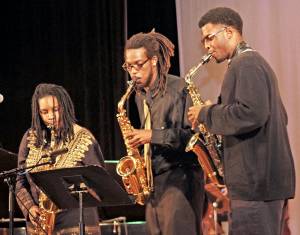 During the month of February, Wellington Gordon, a lecturer in the ECSU Music Department, will present never before seen footage of some of the world’s favorite jazz artists – Louis Armstrong, Ella Fitzgerald, Duke Ellington and Quincy Jones. It is exceptional footage for newcomers and fans who’ve followed these artists for decades. The release of this information is part of a DVD series Gordon created in observation of Black History Month.

This Black History Month Symposium will be held Tuesdays in February at 7 p.m. in the Mary Albritton Douglas Auditorium of the Ridley Student Complex. For Gordon, there is no time like the present to give fans a new glimpse into the icons of jazz music. The music that has been associated with so many historic events, it is a fine tool to use during the month-long spotlight of contributions made by African Americans.

&quotJazz is an American art form that is studied seriously all over the world!&ampnbsp Jazz music is a bridge to the past and the present.&ampnbsp Without jazz music, we would not be listening to the music of today,&quot Gordon said.

&quotJazz music is Black music, it’s gospel music, it’s blues music, it’s folk music, it’s African music. It is a multi-faceted art form that represents tolerance, struggle, forgiveness, imagination, creativity, improvisation, celebration and love. The wonderful and special aspect of these videos is that they were government sponsored recordings from Germany, France, and Holland shot during the 1940’s-1960’s.&quot

The audience will enjoy DVDs that reflect exceptional recordings that include multiple camera angles, and music recorded from the best microphones money could buy. It promises to be a rare, public presentation into the lives of artists whose music is cherished by fans around the world. A brief lecture will precede the shows. Gordon will provide three of the lectures.&ampnbsp Douglass Jackson, an assistant professor of music and a NC Humanities Council Road Scholar, will provide a lecture on Quincy Jones.&ampnbsp He will discuss Jones’ evolution as a musician, his scholarly approach to music, his development as a record executive and producer.

There is no charge for admission into the series. Early arrival is encouraged.