0
401 Views
Warning: json_decode() expects parameter 1 to be string, object given in /srv/users/serverpilot/apps/ecsunewsroom/public/wp-content/plugins/posts-social-shares-count/classes/share.count.php on line 66
0
Shares 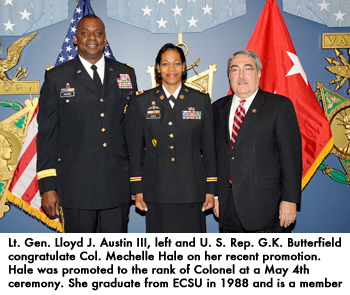 &quotThe Wilson community is immensely proud of Col. Hale’s accomplishments and the patriotic contributions she is making in defending our great country,&quot Butterfield said as a speaker at the ceremony. &ampnbsp

Butterfield noted that he has long known the Hale family – Col. Hale’s mother was a first grade classmate and the family lived just 14 houses away. He said that she serves as an example to the community, and was especially proud that the Darden Alumni Scholarship enabled her to successfully pursue her college degree.

&ampnbsp&quotI’m proud to have been part of the effort to create the scholarship and its shows how much can be accomplished when a community comes together to help it students pursue their goals,&quot Butterfield said.&ampnbsp

Butterfield said he recently talked with Hale at ECSU’s Founder’s Day where she was being honored with a Chancellor’s Legacy Award, and he agreed to attend the promotion ceremony. &ampnbsp

While attending ECSU, Hale was commissioned an Ordnance Officer in the Army Reserve Officer Training Corps Program, receiving Distinguished Military Graduate honors. &ampnbspFrom 1988-1991, she was assigned to the 184th Ordnance Company, Darmstadt, Germany first as a Platoon Leader, and later, as an Operations Officer. From 1991-1996, she was assigned to Fort Bragg, N.C. where she served in the 264th Corps Support Battalion first as a Company Commander, and later as the Battalion S3. As Company Commander, she deployed her unit to Haiti in support of Operation Uphold Democracy. &ampnbsp

From 1996-1998, Hale was assigned as Chief of the Ammunition Branch in the 19th Theater Army Area Command, Taegu, South Korea. She departed South Korea to complete a second consecutive overseas assignment in Hawaii.

From 1998-2001, she served in the 45th Corps Support Group, first as the Group Supply Officer and later as the Battalion Executive Officer for the 524th Corps Support Battalion. &ampnbspFrom 2002-2004, Hale served as Special Assistant to the Commanding General of Forces Command in Atlanta, Ga.

She was then assigned to a joint position in the United States Central Command, Tampa, Fla. &ampnbspFrom 2006-2009, Hale served as the first garrison commander at the U.S. Army Garrison Kaiserslautern. &ampnbspHale earned masters’ degrees from Troy State University and the Naval War College. She and her husband, Ricky, have two sons, Ricky and Rashaad.