Alexa Speller is Bearer of the Mace for fall 2014

0
282 Views
Warning: json_decode() expects parameter 1 to be string, object given in /srv/users/serverpilot/apps/ecsunewsroom/public/wp-content/plugins/posts-social-shares-count/classes/share.count.php on line 66
0
Shares 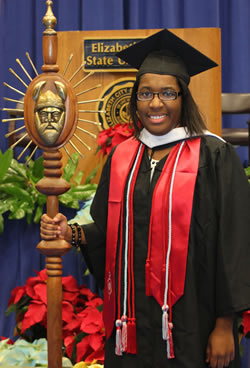 When 172 students filed into the Robert L. Vaughan Center on December 13 for the 159th Commencement Ceremony, the crowd of supporters erupted. Five of them obtained a master’s degree, while the others obtained bachelors’ degrees. As the band played, family and friends waved, some graduates wiped away tears while attempting to smile. One of them, Alexa Speller, was holding a secret that would soon be revealed to her family and the audience. Speller, from Aulander, N.C., was the Bearer of the Mace. &quotBearing the Mace&quot is reserved for the senior who, having earned all credit hours at ECSU, graduates with the highest grade point average. She graduated with a 4.0 grade point average (GPA) and led the undergraduate students into the ceremony. Speller first learned about this great honor as a sophomore at the university and decided to work toward that goal. On Friday, December 12, she was informed that she was indeed Bearer of the Mace for the fall commencement, but kept the news to herself. &quotI was saving the news that I was Bearer of the Mace as a surprise for my entire family. It was extremely difficult to do so because they were constantly trying to figure out my GPA since Friday so I had to be as discreet as possible in my answers,&quot Speller said. &quotThroughout the ceremony, I would look in the direction they were sitting just to see their reaction. I wondered how they would react when they found out I was Bearer of the Mace.&quot Finally the announcement was made. Speller rose, walked the stage and waited for the chairman of the ECSU Board of Trustees, Harvey Walker, to place her hood around her neck, another honor reserved for only the Bearer of the Mace. Speller later said, &quotSeeing my family and friends erupt when I walked off the stage meant the world to me. I felt like they were genuinely proud of me and my accomplishments. Knowing that these individuals could have been anywhere else in the world. . . but cared enough to be with me,&quot Speller, who earned a bachelor’s degree in History, acknowledges there is a national campaign to encourage college students to earn college degrees in the sciences, math, engineering and technology. There is a tendency, Speller said, to presume the History college majors spend much of their time remembering dates or events. She declares today’s History curriculum focuses on the importance of critical thinking, research, and writing skills. She is confident of her field of study and its likelihood to lead graduates to rewarding careers. &quotHistory is a very interdisciplinary college major. Students are exposed to such disciplines as geography, sociology, psychology, and philosophy, which makes a History graduate a well-rounded individual,&quot Speller said. &quotHistory is one of those unique college majors that exposes one to several avenues and allows them to choose the career they want instead of having it chosen for them.&quot Speller also completed the requirements for the Honors Program, making her accomplishment even more impressive, as she had to write and defend her Senior Honors Thesis. Her thesis, which is entitled ‘Historic Leadership: Guiding an HBCU through Turbulent Times’ focuses on the leadership of ECSU by three of its former presidents. She hopes it will prove to be beneficial to present and future of ECSU, as well as other institutions. &quotCompleting my History degree at Elizabeth City State University has been a joyous occasion. [Prospective] students should enroll at ECSU because it is truly a rewarding experience,&quot Speller said. &quotThe faculty members work closely with each student to ensure success and they instill confidence in each student.&quot After working for a few months, Speller plans to enter one of the law schools in North Carolina, and then work toward her goals of becoming district attorney, and later attorney general of North Carolina.

Alexa Speller is Bearer of the Mace for fall 2014